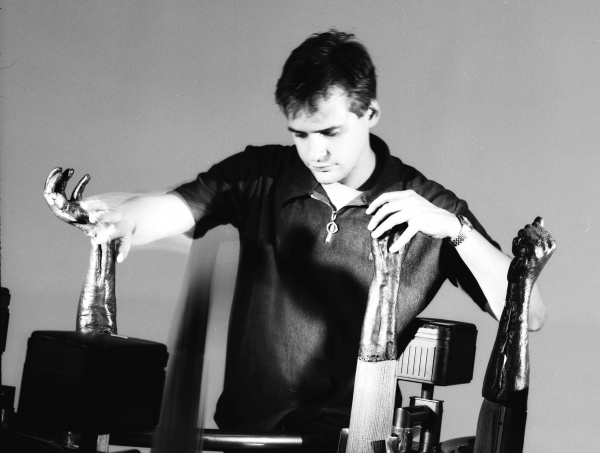 Squeezebox incorporates spatial sound, computer graphics and kinetic sculpture. Participants manipulate the sculpture to produce real-time changes to the spatial location and timbre of the sound, as well as to manipulate digitised images. The sound and images are presented as an integrated plastic object, a form which is squeezed and moulded by participants. The artwork consists of a frame supporting four sculpted pistons on pneumatic shafts. An interactive image is displayed on a monitor beneath a one-way mirror at the centre of the sculpture. Four loudspeakers are situated at the outer four corners.The cast hands of Squeezebox invite participation. Participants grasp and press down the sculpted pieces, working against a pneumatic back-pressure to elicit both sound and image. The interaction reveals a form which has visual, aural as well as physical properties. As participants press down on the hands a sound mass is shifted from one point of the sculpture to another by pressing down on alternate pistons. Music is produced algorithmically and is derived from a set of rules which respond to the spatial location of the sound mass. The system of rules however is never static. One spatial strategy gives way to another resulting in an evolution of sound, requiring a constant readjustment of focus in the listener.

Squeezebox is collabroration between Iain Mott, Marc Raszewski and artist Tim Barrass who designed the interactive graphics. It was first exhibited in "Earwitness", Experimenta '94, ether ohnetitel, Melbourne, 1994. The project was produced with the assistance of The Australia Council, the Federal Government's arts funding and advisory body.