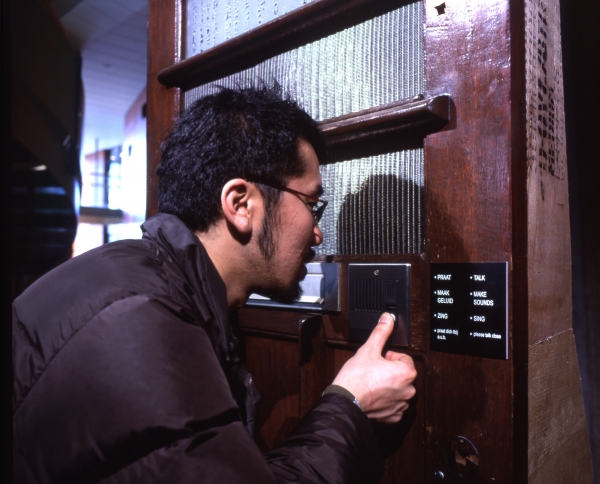 Summoned Voices acts as a living memory of people and place. It consists of a series of door installations each with an intercom, sound system and a computer that is networked to a central file and database server. The design metaphor of the door presents a familiar scenario, that of announcing oneself at a doorway and waiting for a response from persons unknown. Signage instructs the public to speak, make sounds or sing into the intercom. Their voice is stored and interpreted, and results in local playback composed of the individual's voice with those that have gone before. Summoned Voices acts as an interpreter of sound, a message board and an imprint of a community - a place for expression, reflection and surprise.Summoned Voices was premiered at the Art In Output Festival in Eindhoven, Netherlands in February 2003 and is a collaborative project by Iain Mott and Marc Raszewski. It was initiated during Iain Mott's artist residency at the CSIRO Mathematical and Information Sciences in 1999/2000 working with the Digital Media Information Systems (DMIS) research group in Sydney and Canberra. The project was assisted by the New Media Arts Fund of the Australia Council, the Federal Government's arts funding and advisory body. The Studium Generale of the Technische Universiteit Eindhoven assisted the final realisation at Art In Output.