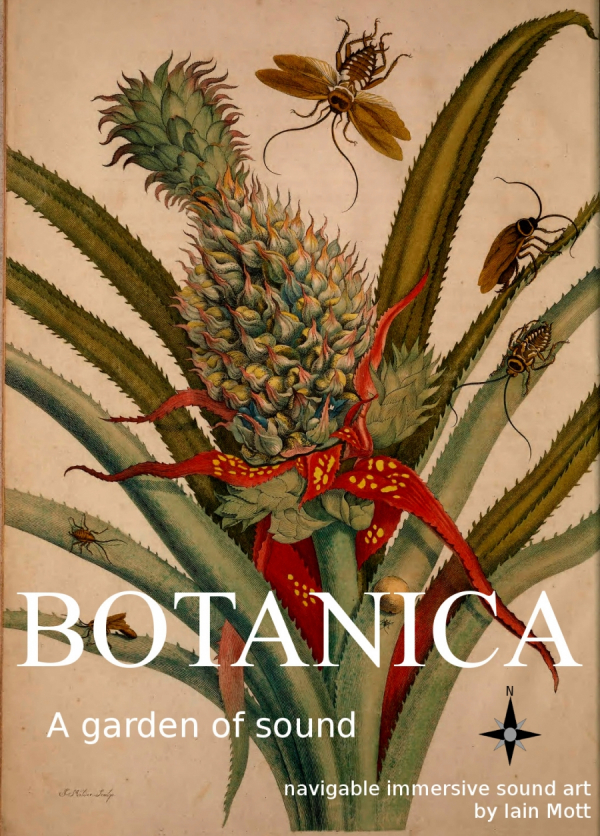 Botanica is a garden-based sound art project by Iain Mott. Members of the public, together with a guide, don headphones and shoulder-bag and explore an immersive sound composition overlaid on the landscape. The sounds heard are largely confected from nature and involve audio recordings from the cerrado of Brazil’s central west. As participants walk through the garden, their movements are tracked by GPS and this allows them to hear a variety of sounds mapped to different locations. The overlapping soundscapes encountered are 3-dimensional and head-tracking on the headphones helps to deliver a interactive immersion responsive to the finest movements of the listener. Sounds may be fixed in space, acting like beacons, or may follow their own trajectory through the garden. The headphones are of an open type, allowing the natural sounds of the environment to blend with those of the overlay.

Botanica is presented as a sonic fantasy. It is inspired by landscape, the biosphere and the elements and is returned to the environment in a form to be explored in a specific setting, the garden, another fantasy of and for nature. It is a sound composition organised in space rather than time and as such interacts directly with the environment and with human presence.

Since the early 1990s, sound artist Iain Mott (UK/AU) has been engaged in the spatial mapping of sound in various contexts. His 1998 work Sound Mapping made with engineer Jim Sosnin and designer Marc Raszewski is particularly relevant to the current project. Among the very first artworks to use GPS,  Sound Mapping was selected for exhibition in the prestigious Prix Ars Electronica of the same year in Linz, Austria.  For the past decade Mott has lived in Brazil where he is regular collaborator with actress Simone Reis and currently a lecturer in voice and sound design at the Departamento de Artes Cênicas (Theatre Arts Department) of the University of Brasilia. Botanica is an outcome of his research in the field of ambisonics (a form a surround sound first developed in the UK in the 1970s) and specifically the project Ambisonic Cerrado which involves the use of ambisonic field recordings of the cerrado in theatrical contexts. His open source computer software Mosca (an ambisonic extension class to the SuperCollider music language) was created in the research and will form the technical basis of Botanica.

Read 2693 times Last modified on Sunday, 25 October 2020 21:41
Tweet
Published in Projects
More in this category: « Welcome to Escuta.org!
back to top