Iain Mott is a sound artist and a lecturer (professor adjunto) in the area of voice and performance in the Departamento de Artes Cênicas (theatre arts), Universidade de Brasilia. His sound installations are characterised by high levels of audience participation and novel approaches to interactivity. He has exhibited widely in Australia and at shows including the Ars Electronica Festival in Linz, Emoção Art.ficial in São Paulo and the Dashanzi International Art Festival and Multimedia Art Asia Pacific (MAAP) in Beijing. His most recent installation with Simone Reis O Espelho was exhibited at the Centro Cultural Banco do Brasil (CCBB) in Brasilia in the second half of 2012. Iain has received numerous awards and grants and has successfully managed innovative projects for almost 20 years. His GPS-based project Sound Mapping was awarded an Honorary Mention in the 1998 Prix Ars Electronica. In 2005 he was awarded an Australia China Council Arts Fellowship to work with the Beijing arts company the Long March Project. His work Zhong Shuo was created as part of the fellowship in collaboration with Chinese artists and was given 3rd prize in the UNESCO Digital Art Awards. The project has in addition been selected by MAAP for two further installations in Shanghai and Brisbane in 2006. Iain was artist in residence at the CSIRO Mathematical and Information Sciences in Canberra for 12 months in 1999/2000. The notion of collaboration between artist and audience has ongoing importance in Iain's work. His PhD from the University of Wollongong was supervised by Greg Schiemer and is entitled Sound Installation and Self-listening. 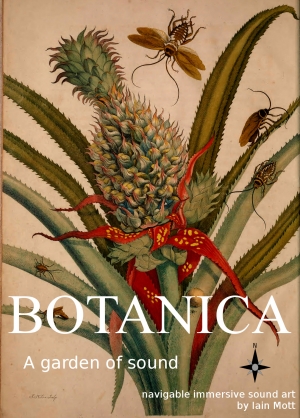 A new version of the software Mosca will shortly be released, implementing work by Thibaud Keller. The release will bring support for new ambisonic libraries as well as VBAP, OSC support and integration with OSSIA-score, improved GUI, support for higher order ambisonic signals, banks of RIRs selectable on a per-source basis and many other improvements. For details on the upcoming release, see the conference paper by Iain Mott and Thibaud Keller: Three-dimensional sound design with Mosca. See also https://escuta.org/mosca.

35mm film photography by Iain Mott. Use the

icon the view full-screen and see the downward facing arrow near the bottom left of screen to hide the thumbnails.

Tutorial on using the GUI interface of the Mosca quark for SuperCollider. Please listen with headphones and please view in full-screen mode. 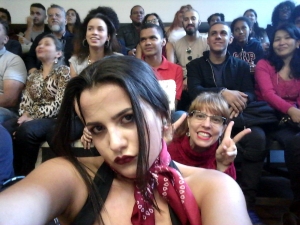 Bash shell script and other settings to download and display the last photo taken on an Android phone. The script is run on a computer and communicates with an Android phone cia WiFi. Tested on Linux. Not particularly efficient, as due to security issues on the Android disabling the running of commands on the remote device via SSH, it is necessarily to download all photos in a designated directory in each cycle (if anyone knows how to get around this, please leave a comment below!). Requires an SSH server app to be running on the Android and for the Android to be configured as a WiFi hub. It also requires the Android to have a copy of an RSA or DSA SSH public key. It's best that the phone is configured to take low resolution photos and the person taking photos will need to periodically delete all the photos in the selected directory to keep the downloads fast. Quite quick to do.

Used for a theatre performance of the play "As Três Patetas em Chamas" (adaptation of Chekhov's "Three Sisters") at the Departamento de Artes Cênicas, Universidade de Brasília, July, 2017, directed by Simone Reis. Images taken by the actors were projected during the performance.

# Mobile phone data
remote_dir=/storage/extSdCard/DCIM/Camera
port=57846
dst=This email address is being protected from spambots. You need JavaScript enabled to view it..1   # username in SSH server app and IP address of mobile phone. All the Androids I tested had this IP

# create a start up image of your choice in directory where you will store images
# in my case I created a black image called black.jpg
cp black.jpg image.jpg

1. On the computer, make sure you have SSH and "feh" installed (and anything else required in the script not installed by default).
2. On the Android, install an SSH server app. I chose "SSH Server" and it works well.
3. On the computer, create an RSA key pair and email or transfer a copy of the public key to your phone.
4. On the phone, save the RSA public key to a known location and also discover to which directory the phone saves its photos.
5. In SSH Server, create a new server, give it a name an allocate a port number (or note the port number automatically allocated)
6. Click the "user" tab in SSH Server and create a new user, giving the user a name.
7. Deselect "enable password" and select "enable public key" then browse to find the key previously stored in step 4.
8. Leave the SSH Server app, saving your settings.
9. Still on the Android, turn WiFi off and set up your phone as an active WiFi router, WiFi Hotspot or whatever.
10. On your computer, connect to the Android's WiFi.
11. Edit the script changing the remote_dir, port, username, local download directory and anything else that needs changing.
Also edit the name of your start up image, if not "black.jpg" (create this image too, and place it in the local download directory).
12. Mark script as executable and run it.
13. Debug.
14. Use "q" as your escape character.

Please listen with high quality headphones and ensure that the left and right channels are correctly aligned.

This video documents Botanica with unedited footage made from the perspective of the participant. The camera follows the participant's head movements and the sounds heard in the headphones move correspondingly. As the participant walks, he/she passes through various dynamics sound fields mapped to the garden.

Recordings used in this demonstration of Botanica made by Iain Mott include: sounds of the cerrado environments of central Brazil, aquatic sounds from the Melbourne Aquarium and Port Phillip Bay in Australia and of a Buddhist temple in Chongqing, China.  The sounds of geese and of a choir were recorded by John Leonard and the sounds of satellite transmissions were recorded by Roy Welch e Don Woodward. These recordings are used with kind permission. Electro-acoustic music in the video is by Iain Mott. 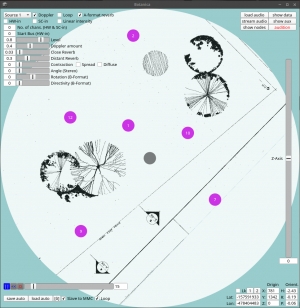 Screenshot of Botanica software (2017). The listener is represented by the central grey dot. The pink dots are the virtual sound sources. As the listener moves through the garden, the map moves in the opposite direction to his or her path with the grey dot remaining at the centre. The pink dots may be stationary on the map or may have their own animated trajectories. As the listener moves, the sound sources move relative to the sliding map. Like real sounds, the virtual sound sources become quieter with distance and they become inaudible once they pass outside the circular boundary of the map. The software is used to perform the mapping of sounds in advance of public interaction and to deliver the 3D sound experience in the field. The software display is not visible to participants. 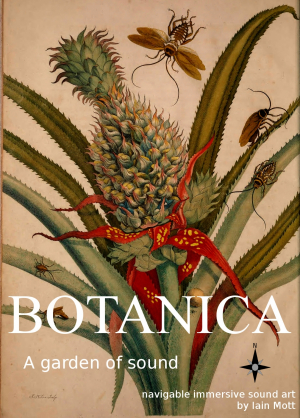 Botanica is a garden-based sound art project by Iain Mott. Members of the public, together with a guide, don headphones and shoulder-bag and explore an immersive sound composition overlaid on the landscape. The sounds heard are largely confected from nature and involve audio recordings from the cerrado of Brazil’s central west. As participants walk through the garden, their movements are tracked by GPS and this allows them to hear a variety of sounds mapped to different locations. The overlapping soundscapes encountered are 3-dimensional and head-tracking on the headphones helps to deliver a interactive immersion responsive to the finest movements of the listener. Sounds may be fixed in space, acting like beacons, or may follow their own trajectory through the garden. The headphones are of an open type, allowing the natural sounds of the environment to blend with those of the overlay.

Botanica is presented as a sonic fantasy. It is inspired by landscape, the biosphere and the elements and is returned to the environment in a form to be explored in a specific setting, the garden, another fantasy of and for nature. It is a sound composition organised in space rather than time and as such interacts directly with the environment and with human presence.

Since the early 1990s, sound artist Iain Mott (UK/AU) has been engaged in the spatial mapping of sound in various contexts. His 1998 work Sound Mapping made with engineer Jim Sosnin and designer Marc Raszewski is particularly relevant to the current project. Among the very first artworks to use GPS,  Sound Mapping was selected for exhibition in the prestigious Prix Ars Electronica of the same year in Linz, Austria.  For the past decade Mott has lived in Brazil where he is regular collaborator with actress Simone Reis and currently a lecturer in voice and sound design at the Departamento de Artes Cênicas (Theatre Arts Department) of the University of Brasilia. Botanica is an outcome of his research in the field of ambisonics (a form a surround sound first developed in the UK in the 1970s) and specifically the project Ambisonic Cerrado which involves the use of ambisonic field recordings of the cerrado in theatrical contexts. His open source computer software Mosca (an ambisonic extension class to the SuperCollider music language) was created in the research and will form the technical basis of Botanica.

Published in Projects
Tagged under
Read more...
Page 1 of 9