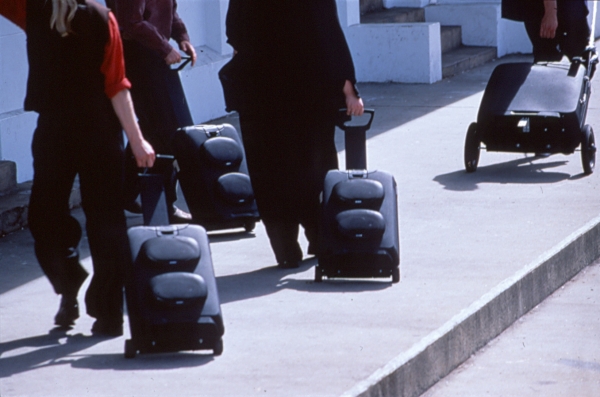 Sound Mapping is a participatory work of sound art made for outdoor environments. The work is installed in the environment by means of a Global Positioning System (GPS), which tracks movement of individuals through the space. Participants wheel four movement-sensitive, sound producing suitcases to realise a composition that spans space as well as time. The suitcases play music in response to nearby architectural features and the movements of individuals. Sound Mapping aims to assert a sense of place, physicality and engagement to reaffirm the relationship between art and the everyday.

Sound Mapping is a collaborative project by Iain Mott, Marc Raszewski and Jim Sosnin. The premier exhibition was staged in Sullivan's Cove, Hobart by the Tasmanian Museum and Art Gallery (TMAG) on 29 January - 15 February, 1998. Sound Mapping was awarded an Honorary Mention in the Interactive Art category of Prix Ars Electronica in Linz, Austria. The project was exhibited as part of the Ars Electronica festival in Linz, Austria in September 1998. It is pictured on this page at the 2004 International Conference on Auditory Display (ICAD) at the Sydney Opera House.

Read 6735 times Last modified on Wednesday, 07 October 2015 01:02
Tweet
Published in Projects
More in this category: « Close Sound Mapping: an assertion of place »
back to top